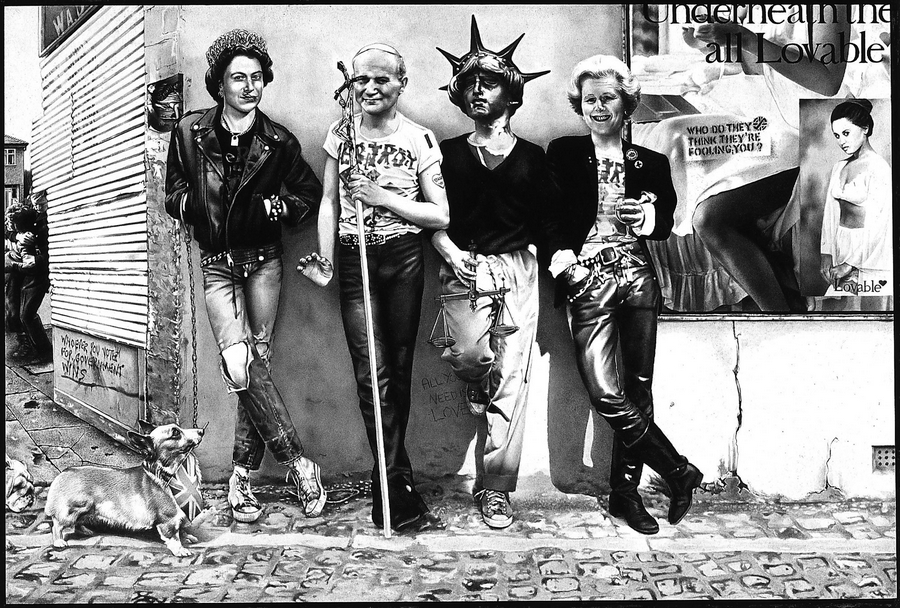 Today’s Song of Sacrilege is Reality Asylum by Crass.

I am no feeble Christ, not me.
He hangs in glib delight upon his cross. Upon his cross.
Above my body. Lowly me.
Christ forgive, forgive. Holy he, he holy, he holy.
Shit he forgives. Forgive, forgive. I, I, Me, I.
I vomit for you, Jesu. Christi-Christus.
Puke upon your papal throne.
Wrapped you are in the bloody shroud of churlish suicide.
Wrapped I am in the bloody cloud of hellish genocide.
Petulant child.
I have suffered for you, where you have never known me.
I too must die. Will you be shadowed in the arrogance of my death?
Your valley truth? What lights pass those pious heights?
What passing bells for these in their trucks?
For you Lord, you are the flag-bearer of these nations,
one against the other, that die in the mud.
No piety, no deity. Is that your forgiveness?
Saint, martyr, goat, billy. Forgive?
Shit he forgives.
He hangs upon his cross in self-righteous judgment,
hangs in crucified delight, nailed to the extent of his vision.
His cross, his manhood, his violence, guilt, sin.
He would nail my body upon his cross,
as if I might have waited for him in the garden,
as if I might have perfumed his body, washed those bloody feet?
This woman that he seeks, suicide visionary, death reveller,
rape, rapist, grave-digger, earth-mover, life-fucker. Jesu.
You scooped the pits of Auschwitz.
The soil of Treblinka is rich in your guilt,
the sorrow of your tradition,
your stupid humility is the crown of thorn we all must wear.
For you? Ha. Master? Master of gore.
Enigma.
Stigma.
Stigmata.
Errata.
Eraser.
The cross is the mast of our oppression.
You fly their vain flag. You carry it.
Wear it on your back Lord. Your back.
Enola is your gaiety.
Suffer little children, suffer in that horror.
Hiro-horror, horror-hiro, hiro-shima, shima-hiro,
hiro-shima, hiro-shima, Hiroshima, Hiroshima.
The bodies are your delight.
The incandescent flame is the spirit of it.
They come to you Jesu, to you.
The nails are the only trinity.
Hold them in your corpsey gracelessness.
The image that I have had to suffer.
These nails at my temple.
The cross is the virgin body of womanhood that you defile.
In your guilt, you turn your back, nailed to that body.
Lamearse Jesus calls me sister! There are no words for my contempt!
Every woman is a cross in his filthy theology!
He turns his back on me in his fear.
His vain delight is the pain I bear.
Alone he hangs, his choice, his choice.
Alone, alone, his voice, his voice.
He shares nothing, this Christ; sterile, impotent, fuck-love prophet of death.
He is the ultimate pornography. He! He!
Hear us, Jesus!
You sigh alone in your cock fear!
You lie alone in your cunt fear!
You cry alone in your woman fear!
You die alone in your man fear!
Alone Jesu, alone, in your cock fear, cunt fear, woman fear, man fear.
Alone in you fear, alone in your fear, alone in your fear.
Your fear, your fear, your fear, your fear, your fear, your fear, your fear,
Warfare, warfare, warfare, warfare, warfare!

JESUS DIED FOR HIS OWN SINS. NOT MINE.