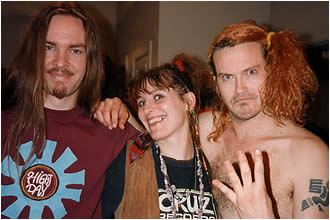 Today’s Songs of Sacrilege is Lisa’s Father by Alice Donut.

Hi, I’d like to tell you a story about something
That happened to me
I was sitting at home just the other day
Watching some TV, when there’s a knock on my door
And I went to the door to see who it was, and
It was a woman with no eyes
And she had a stackfull of comic books
And she gave me one and then she said:
Take it and read!
And I took it, and I did read. And the story was
So moving and compelling that I had to write a
Song about it
It wasn’t one of your regular comic books
Rather it was one of those comic books from Chick publications out of
California, one of those comic books that’s
Meant to convert you to a fundamental Christianity

And it was a story about a family
And the father’s name was … he was name was Lisa’s father
And the mother’s name was … her name was Lisa’s mother
And then there was a child, a five year old child
Named Lisa
Lisa, pure as the driven snow
But she was driven in other ways as well, I’ll
Tell you about that later
Lisa’s mother was an alcoholic
She used to sit and knock back JD from 8 o’clock
In the morning ’til she passed out at midnight
Lisa’s father however, he was a sinner of another sort
He was a sinner of a different color, if you know what
I’m talking about
He was a kind of a man
A kind of a man who didn’t keep his sinning to himself
‘Cos he was a child-molester
This was a man who abused his little daughter Lisa
Every night. Every afternoon. Every morning
As soon as Lisa’s mother was whacked out on JD –
He’d go up to Lisa’s bedroom
And he’d start wailing around this poor little kid
Making that sound:
Oh waka waka waka baby baby baby –
Have me a good time yeah yeah
Yeah – yeah
One day he was up there, doing what he once did to
That poor little girl
When there was a knock on his front door
He tucked in his shirt, and he ran down
And he pulled up his pants
And he answered the door as quick as he could
And he said:
– Yo! Who’s there?
– Hey, this is Phil. Your neighbor!
– Oh! Hey, how’re you doing?
– Hi, Lisa’s father!
– How’s the weather?
– Oh, the weather is fine and I know what
You’ve been doing with Lisa
But you’d got to let me do it too
If you don’t want me to turn you in!
And Lisa’s father said:
– Whoa, I’m in the soup now!
What am I gonna do?
I gotta let him do it to Lisa or
Else he’ll turn me in to the police!
– Okay! You can do it!
You can do it too!
Upstairs the two of them went
And from that day on the both were doing it
To poor little Lisa
One day the mother dried up just long enough
To take that kid to the doctor
The doctor took one look at this kid, and
Do you know what the doctor said?
– Your daughter has a venereal diseases
And that mother, she put two and two together mighty
Fast, I’ll tell you
She knew what was going on up there
And she grabbed that kid – she started running home
She ran home as fast as she could
And she ran and she pointed a finger at Lisa’s father
And she said:
– You repulsive little shit!
I hate you! I hate you!
And Lisa’s father said:
– Whoa! Whoa, I’m in the soup now!
She knows what I’ve been doing to Lisa
He ran!
He ran out that door as fast as he could!
He started to make his way down to the bridge
Just like James Stewart in “It’s a wonderful life”
He was going to throw himself off that bridge
A woman with no eyes and a handful of comic books
Walks up to him ‘n’ give him a comic book
Just like the woman in my …
And she gave him a comic book and she said:
– Just pray!
Just pray, is what she said
The next panel said “15 minutes later”
And he said:
– Whoa! I feel excellent!!
I’m gonna go home and tell Lisa’s mother about
This prayin’ stuff
And he ran home, and he said:
– Hey, Lisa’s mother. Listen to this!
And she said:
– I hate you! I hate you!
And he said:
– Oh shut up you old cow!
Listen to this:
Get up and pray!!
15 minutes later
She says, she says:
– I feel great!
And Lisa’s father says:
– Let’s call Lisa in and tell her
What’s happening around here!
They call in Lisa
And Lisa is a little scared
They say:
– Hey Lisa. We’ve got some good news for you!
We’re never
Gonna hurt you
Never gonna hurt you anymore
And Lisa says, Lisa says:
– oh really!?