Songs of Sacrilege: Christmas Time in Hell by the South Park Team 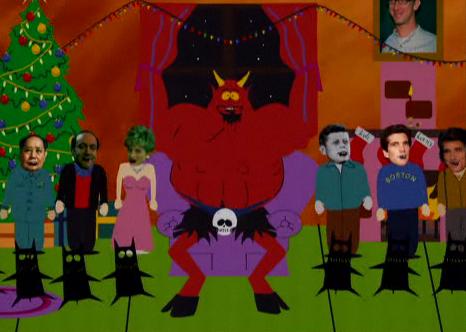 Today’s Song of Sacrilege is Christmas Time in Hell by the South Park Team.

Satan: Well I tell you what,
Maybe we’ll have ourselves a little Christmas, right here.
C’mon everyone, gather `round!

String up the lights and light up the tree
We’re going to make some revelry
Spirits are high, so I can tell
It’s Christmas time in hell!

Demons are nicer as you pass them by
There’s lots of demon toys to buy
The snow is falling and all is well
It’s Christmas time in hell!

There goes Jeffery Dahmer,
With a festive Christmas ham
After he has sex with it,
He’ll eat up all he can.

And there goes John F. Kennedy
Caroling with his son
Reunited for the holidays
God bless us, everyone!

Everybody has a happy glow
Let’s dance in blood and pretend its snow
Even Mao Tse-Tung is under the spell
It’s Christmas time in hell!

Adolf, here’s a present for you.

God cast me down from Heaven’s door
To rule in hell for evermore
But now I’m kinda glad that I fell
‘Cause It’s Christmas time in hell!

Here’s a rack to hang the stockings on
We still have to shop for Genghis Kahn!
Michael Landon’s hair looks swell!
It’s Christmas time in hell!

For one day we all stop burning
And the flames are not so thick
All the screaming and the torture stops
As we wait for old Saint Nick!

So string up the lights and light up the tree
We’re damned for all eternity
But for just one day all is well
It’s Christmas time in hell!

We’ve got to toast together, and make it quick!
We’ve gotta make room for Andy di*k.
Wake his mother and ring the bell