The Sounds of Fundamentalism: Five Reasons Not to Vote for Barack Obama by Janet Porter 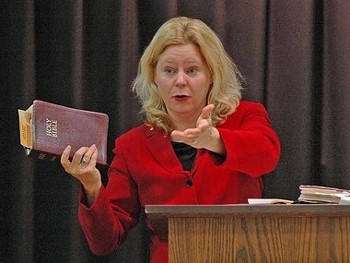 This is the thirty-eighth installment in The Sounds of Fundamentalism series. This is a series that I would like readers to help me with. If you know of a video clip that shows the crazy, cantankerous, or contradictory side of Evangelical Christianity, please send me an email with the name or link to the video. Please do not leave suggestions in the comment section.  Let’s have some fun!

Today’s Sound of Fundamentalism is a video by Ohioan Janet Porter, director of Faith2Action. Produced in 2012, this video is seven minutes of lies and distortions. As for her 2012 predictions, none of them came to pass. Perhaps it is time for Evangelicals to stone to death the false prophet Janet Porter.