The Sounds of Fundamentalism: When America is Not American Anymore by Scott Wesley Brown 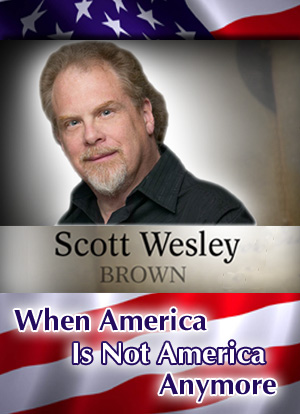 This is the fifty-second installment in The Sounds of Fundamentalism series. This is a series that I would like readers to help me with. If you know of a video clip that shows the crazy, cantankerous, or contradictory side of Evangelical Christianity, please send me an email with the name or link to the video. Please do not leave suggestions in the comment section.  Let’s have some fun!

Today’s Sound of Fundamentalism is Christian artist Scott Wesley Brown singing When America is Not American Anymore. Poor Wesley Brown, he has lost HIS America. The person who suggested this song had this to say:

This song was a big factor in my renouncing evangelical Christianity. It came out in September 2008, when it was becoming evident that Barack Obama would be the next President. If it was Christianity that provoked the Evangelical reaction to Obama, that was all the proof I needed that Evangelical Christianity was not a religion worth having. It horrified me how Evangelicals felt it was not enough to disagree with Obama; you had to demonize him to prove your Evangelical credentials. You had to perpetuate the myth that American was founded as a Christian nation and Obama and his fellow liberals (which Brown refers to as “voices to my left”) are evil people who oppose the church, deliberately reject the intent of the founding fathers, and don’t distinguish right from wrong.

When I heard this song, I friended Scott Wesley Brown on Facebook and saw a “Nobama” album in his photos. It featured a drawing of Obama made to look like communist propaganda, including a red hammer and sickle in the background. When I commented negatively on the pictures and the song, Brown sent back snarky comments like “What planet are you on?” and “What drugs have you been taking?” It confirmed the fundamentalist tendency to make your religion more about believing the “right” doctrinal positions than treating people kindly.